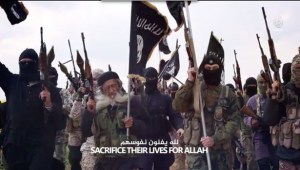 A gruesome new ISIS recruitment video has been released aiming to join the terror group by showing dead fighters ‘at peace with Allah’.

Barbaric footage shows ISIS militants beheading and slaughtering opponents as it boasts its jihadis ‘embody the meaning of manhood’.

The propaganda film also claims to show dead ISIS fighters looking ‘at peace’ while describing them as ‘a slave thankful to Allah’.

The video includes English subtitles warning, ‘the disbelievers today are heading towards extermination’ while showing the bloody executions of restrained prisoners.

The film also includes quotes from the terror group’s leader Abu Bakr al-Baghdadi boasting of the ‘power’ and ‘determination’ of Islamic state fighters.

But despite bold proclamations within the propaganda footage, ISIS has seen its fighters ‘wiped out’ as the group has been forced back from key positions across Syria.

Most notably, ISIS was driven out of Palmyra last week and Russian forces have now entered the city to clear the area of booby traps left by militants.

Experts claim the wave of attacks is the UK’s most fierce “punch” against the jihadis since bombing began.

Analysts arrived at the body count using footage from Typhoon and Tornado jets – but the Ministry of Defence refuses to give exact figures.

A number of key IS positions in northern Iraq were pounded with guided missiles while in eastern Syria, a Reaper drone took out a vehicle with a Hellfire missile. And Typhoons hit five targets near Mosul on March 25.

The campaign has been ramped up as fighters retreat.

A source said: “This is the biggest punch against IS that the RAF and SAS have delivered.”