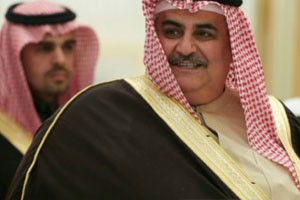 “We need to be present on the ground to obtain the application of UN Resolution 2216 and the return of the legitimate authority to power,” he said, according to AFP.

“We must be sure that we completely eliminate the Iranian influence and that of their Huthi allies.”

Bahrain is part of an Arab coalition that since March has been striking from the air at the Shiite Houthi rebels in a bid to prevent them from taking full control of Yemen and to restore the rule of President Abedrabbo Mansour Hadi, who is exiled in Saudi Arabia.

He urged the regime in Iran to refrain from interfering in the internal affairs of other countries and said Tehran should stop what he described as “dualism” between its language and actions, the Bahraini News Agency reported.