You are here: Home / Senza categoria / Ground forces can only wipe out Islamic State 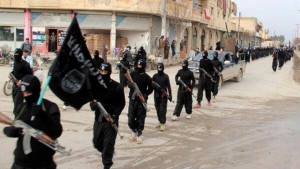 Islamic State again has proved its striking capability beyond Iraq and. Recently the so-called soldiers of the caliphate appear to have demonstrated a chilling reach, with terrorist attacks against Russia, Lebanon and France. The seemingly synchronized assaults that turned Paris into a war zone came just days after a bombing targeted a Shiite district of Beirut controlled by Iran’s ally, Hezbollah, and a Russian passenger jet was downed over Egypt’s Sinai Peninsula. The rapid succession of strikes, all claimed by the Islamic State, suggested that the regional war is taking the shape of a global nature. The skill and determination of IS leaders and fighters, organizational size and its demonstrated lethality distinguish it from other terrorist groups. So the potential global threat poses by the Islamic State will be different and very high in magnitude than once posed by al-Qaeda. But one biggest irony is that still after the air campaign launched by the world super powers against Islamic State it is still deadlier to carry out attacks far from its strongholds in Middle-East.

Despite thousands of U.S. airstrikes in Iraq and Syria that are reported to have killed about 10,000 Islamic State fighters, the group continues to replenish its forces. Intelligence analysts have estimated that almost 30,000 foreign militants from more than 100 countries have entered Iraq and Syria since 2011, with the Islamic State gaining about 1,000 fighters a month. A very important component is missing in all this anti IS strategy which is absence of any effective ground forces against Islamic State. No amount of airstrikes can ever fully obliterated the hated Islamist fanatics because even the very extensive air campaigns will still leave enough residual force, leadership, and safe-haven, to allow ISIS to reconstitute and reorganise itself.  American forces have been bombing Islamic State targets for more than a year without significant progress. Now joined in those efforts by Russia as well but have thus far been unable to seriously degrade the capability of those violent fanatics. It was argued that US air campaign aimed at “Containing” IS and to stop its expansion. But a strategy that only disrupts or contain without defeating or destroying ISIS has no prospect for a successful outcome.

ISIS is a serious enemy with significant skill as light infantry. Aerial bombing is a conventional modern counter-state strategy. It is the least efficient and least decisive strategy, even more so against the Islamic State in 2015 than against Germany in 1945. The Islamic State is not dependent on heavy industry or urban infrastructure which if targeted by the bombing will affect its fighting capabilities. Air strikes alone are indecisive without a ground campaign to flush the terrorists/insurgents out of their hiding places and to contain them for separation from ordinary civilians. There is a need of an integrated strategy, including an air campaign and commitment of ground troops. Its being long argued that local militias or groups which opposes IS can be used on ground against Islamic State. But it’s a hard fact that no group has a strength to take on IS in direct confrontation. Even the Kurdish militia’s like- PKK and YPG which got battlefield success against Islamic State in limited arena are unwilling to battle IS on large scale and on multiple fronts. Kurdish militia’s has a uni-focal approach to safeguard their strongholds from IS and consolidate their positions.

To defeat the Islamic State and contain ISIS fighters, the ground campaign would need to be led by first-tier Western armies, would need to be of a scale equivalent to the invasion of Iraq in 2003, and would need the cooperation of Iraq and Syria neighbours, so that Iraq’s and Syria’s borders can be closed, otherwise ISIS fighters would escape to other states. This cooperation would need to include not just Western “allies” Kurds and Turkey, but at least tacit cooperation from Western “enemies” Syria, Iran and Russia. Without a Western-led invasion, ISIS will dominate its current territory indefinitely, in yet another lingering civil war, in yet another failed states, with yet more contagion to other states. Consolidating its territory over years if not decades and will use this consolidated territory as a launch pad for attacking Western interest all across the region and even on global scale.