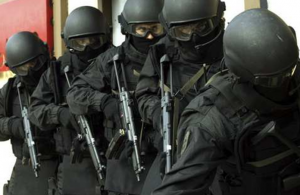 Greek Police have arrested a man who is suspected of supplying arms to Lebanon-based Islamist terrorist group Hezbollah.

The suspect, arrested Tuesday in Aspropyrgos, is alleged to own a firm based in Amman, Jordan, trading in a range of goods from security systems to beauty products and health foods.

The man who has a dual American and Jordanian nationality was arrested after Greek authorities received information from U.S. intelligence services. According to Greek Police, the suspect faced extradition on a U.S. arrest warrant on charges of arms dealing and money laundering.

According to police, the 49-year-old man was making a deal for 200 M4 assault rifles to allegedly send them to Iraq. The man who was supposed to sell the arms was an intelligence service undercover agent. The last time the two men met was in the spring of 2015.

The suspect is said to have claimed that the money for the purchase was coming from Beirut. He returned to Athens on Monday, expecting to take a delivery of the weapons.

A Greek Police source said he is believed to be a powerful arms dealer supplying Hezbollah and trafficking weapons to Iran, Iraq, Ukraine and Libya.