You are here: Home / Europe / Greece: violent fights between Afghans and Algerians at Chios migrant camp 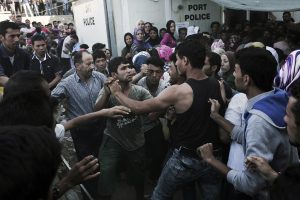 A feud between Afghan and Algerian migrants that started on Wednesday afternoon resulted in violent fights with many injuries at the Souda camp on Chios island late on Wednesday night, according to greekreporter.com.

According to politischios.gr news website, it all started after midnight when a group of about 20 Afghan nationals from the VI.AL. and Souda migrant camps invaded the Souda camp and started beating and throwing stones at Algerian nationals.

According to the report, the area turned into a battlefield for about 20 minutes, until riot police rushed to the camp and forced the agitators to flee. One woman and a child were injured and taken to the Skylitseio Hospital for treatment.

Police chased the perpetrators and apprehended three people, as most of them escaped through the town Castle.

Fearing more violence, the UNHCR announced that from Thursday morning until the afternoon of the same day there will be no migrant transfers from the VI.AL. to the Souda camp. They suspect that Afghan migrants will try to gather again and attack Algerians.