You are here: Home / Europe / Great Britain: over three quarters of Conservative Party members think we should bomb ISIS in Syria 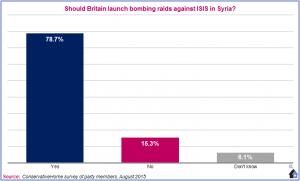 As we noted last month, the border between Iraq and Syria within ISIS territory is notional at best. Last week, Liam Fox called the policy of carrying out airstrikes against ISIS in the former country but not the latter ‘absurd’ – also arguing that it was counter-productive to effectively notify violent extremists that they would be safe to operate in particular areas without fear of our bombs.

While the Prime Minister is reportedly tentatively discussing with Labour’s interim leadership the prospect of expanding the scope of airstrikes, if he seeks to pursue such a policy then he must bring his own Party with him. Attempting to rely on what turned out to be totally unreliable Labour votes back in August 2013 led him to suffer the worst foreign policy defeat in modern times – for obvious reasons he should avoid repeating the experience.

The opinion of the Parliamentary Party doesn’t always follow the opinion of the grassroots, but this survey result really is quite striking: 78.7 per cent of Conservative Party members surveyed think Britain should launch bombing raids against ISIS in Syria, with only 15.3 per cent opposing the idea and a mere 6.1 per cent saying they don’t know.

That doesn’t guarantee the policy will be changed, of course, but it will reassure any MPs who might have been worrying about grassroots opposition to doing so.

>Over 700 party members responded to the survey.