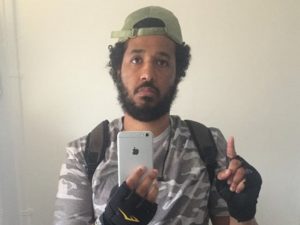 Sahayb Abu, 27, is on trial at the Old Bailey after he was accused of buying an 18-inch sword, a knife, a balaclava and gloves while allegedly plotting a terror attack during the pandemic, like reported by independent.co.uk.

He is accused of discussing firearms with an undercover police officer, known as Rachid, who he befriended through a jihadist chat group on encrypted messaging app Telegram.

They met up at Surrey Quays in southeast London as Rachid wanted to find out if Abu wanted a gun and if he was potentially planning a terrorist attack, the officer told the court.

They also discussed other topics, including a “brother who got 28 years” in prison for talking about poisoning the royal family with ice cream.

According to a transcript of the meeting, Abu detailed an “attack on Prince George” planned by pro-Isis propagandist Husnain Rashid.

“They’re gonna go buy some ice creams and then most likely the son will eat it.”

Abu replied: “It’s better for you to just leave the country… that’s why this wasn’t very intelligent.

“And then 28 years the kuffars (non-believers) are gonna laugh at you, lock you every day and you’re gonna end up saying ‘oh this aqeeda (creed) brought me this’.”

Rashid was jailed for life with a minimum term of 25 years in 2018 for a number of terror offences, including preparing terrorist acts and encouraging terrorism.

“He said he should have gone away, ie left the country.

“This is an example in which much of the conversation at the meeting sort of repeats quite a lot about what he has already talked about in terms of subject matter, both with you privately and the (Telegram) group, when you meet face-to-face.”

The officer, giving evidence from behind a screen, said: “Maybe, yes. I’m just trying to recall what we talked about for four hours.”

Abu, from Dagenham, east London, denies preparing an act of terrorism. He was arrested on 9 July, days after sending a rap to two of his brothers that ended with the words: “My shank (knife) penetrate ya, got my suicide vest – one click, boom, and I’ll see you later.”

His brother, Mohamed Abu, 31, denies failing to disclose information about acts of terrorism. The trial continues.