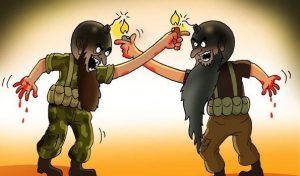 Several Iraqi intelligence reports claimed that Islamic State chief Abu Bakr al-Baghdadi issued an order to kill hundreds of his followers, including leading figures, in Iraq and Syria over their disloyalty to the group, like reported by iraqinews.com.

The reports came at a critical time as the extremist group lost about 90% of the territory it controlled in Iraq and Syria in 2014, when it declared its “caliphate”.

Speaking to the Iraqi Shafaq News website, intelligence sources said that the world’s most wanted man “issued an order to kill 320 of his followers for their betrayal of the so-called Islamic State and their recklessness, a matter which inflicted heavy losses on the group in both Iraq and Syria.”

After hearing the news, a large number of IS militants escaped to unknown locations in fear of their lives with some reports expecting Baghdadi to issue more lists in the near future.

In his recording titled “Give glad tidings to the patient”, Baghdadi called on his followers to burn their enemies everywhere and target “media centres of the infidels”.

Baghdadi emerged as leader of al-Qaeda in Iraq, one of the groups that later became Islamic State, in 2010. In October 2011, the US officially designated al-Baghdadi as a terrorist. It has offered a reward of up to $25m (£19.6m) for information leading to his capture or death.