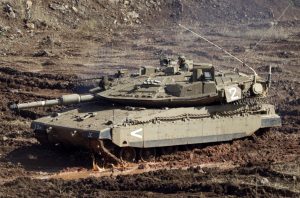 The offensive, backed by Russian planes, is now within 10 km. of Israeli forces on the Golan border and risks opening a new front between Islamic State and the Syrian army.

The Syrian regime launched an offensive last month to defeat the rebels in southern Syria, who have held a large area, roughly the size of the Galilee, in Syria over the last six years. In the last week the numbers displaced by the fighting have risen to 270,000 from 60,000 creating a massive humanitarian crisis. Thousands of those fleeing the fighting are clustered on the Israeli border at al-Rafeed. Now the Syrian regime forces are closing in on the strategic corridor that connects the Syrian rebel areas near the Golan to the Syrian rebel areas near Dera’a next to the Jordanian border.

Currently the rebels near the Golan are connected to the Jordanian border via a road that runs from Quneitra and al-Rafeed through Nawa to Muzayrib.

To the west of the road is a small pocket of ISIS-controlled territory run by an ISIS-affiliate named Jaysh Khalid bin- Walid. Since ISIS appeared near the Golan in Syria several years ago it was isolated between the rebels and the regime. In the opening days of the offensive the regime and Russian air force was careful to avoid shelling near the Israeli border. But in the last few days they carried out numerous air strikes on Nawa, and Republican Guard armored vehicles captured Ibta and Da’il, two villages that gave the regime access to the town of Tafas. If Tafas falls the Syrian rebel areas will be cut into two pieces, one near the Golan and one near Jordan, which will increase pressure on Israel as refugees flee toward the Golan border.

As warplanes pounded Tafas on Sunday, a Twitter account associated with the rebels showed images of armored vehicles advancing. The rebels claimed to have taken out a Syrian regime T-72 but the advance continued. The rebels also claimed that “Iranian militias” were in the offensive.

This apparently refers to the Iranian- backed Liwa Abu al-Fadl al-Abbas, which has been photographed in the vicinity of Tafas. Its hardened fighters have played a key role in recent Syrian offensives in Damascus and the south. In early June images of their fighters posted online even bragged that they were on the way to Quneitra.

As the offensive unfolds Israel has said that it won’t allow refugees to cross the border but it has provided humanitarian aid. In addition Jerusalem has warned that Iranian forces must not be active in Syria.

The role of ISIS in the upcoming conflict may determine whether the offensive closes in on the Israeli border. On Sunday there were rumors that Syrian rebel fighters, disappointed by their own leadership’s lack of steadfastness in the face of the battle, had considered going over to ISIS. A document posted online by Aymenn Jawad al-Tamimi shows that the rebels and ISIS would have trouble reconciling their differing ideologies. “Simply put, the ideological rift is too great, each side demands that the other should repent of its erroneous ways,” he wrote Sunday.

As the regime closes in on the rebels the potential fighting with ISIS could threaten the relative stability near the border.

This is because the ISIS affiliate controls an area very close to al-Rafeed where thousands of Syrian internally displaced persons are clustered. It is also because ISIS could threaten any Israeli humanitarian aid crossing the border or seek to provoke Israel into a clash with the Syrian regime. In addition the Russian air force has consistently said its main role in southern Syria is to strike at ISIS and other extremist groups, which could draw the Russian activity closer to the border. Israel has so far had a working de-confliction arrangement with Moscow.

In addition, if the regime cuts the road from Nawa south the rebels and the civilians in the area near the Golan will be cut off from any aid they had been receiving from near Jordan. This will make them increasingly reliant on Israel for humanitarian aid, increasing chances of a crisis. The Syrian regime and its Russian allies likely know this and they are waging the current battle accordingly.