You are here: Home / Africa / Ghana to set up special police force to counter terrorism 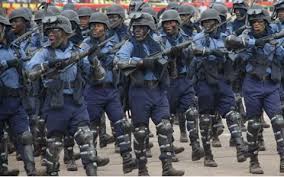 He gave the green light to the police high command to prepare the grounds and establish a Special Police Force against the scourge of terrorism which he believed was getting closer to the country, citing cases in Nigeria with Boko Haram, as well as Mali and Burkina Faso.

“We cannot sit and think that Ghana is immune from the scourge of terrorism and so we must be ready to confront any incident that may arise,” Mahama, who was speaking at the Ghana Police Service annual get-together, popularly known as the West Africa Security Service Association, stated.

Mahama mentioned Burkina Faso and Mali which have suffered attacks by terrorist groups on separate occasions with various degrees of fatalities.

The president therefore noted that Ghana was not immune to attacks and must therefore put in place the necessary measures to counter terrorism.

Meanwhile, the “Formed Police Unit (FPU)”, formerly known as the “Armored Squadron”, which functions as a mobile division, has been in charge of responding to public disorder situations and maintains law and order.

The FPU has been trained to carry out hostage rescue, counter-terrorism and counter-insurgency, criminal intelligence gathering, house and vehicle search and barricade reconnaissance and removal.

In a separate event on Sunday, the president described terrorism as a real threat facing West Africa needing concerted efforts to overcome.

“The third threat is terrorism and religious extremism. This is a scourge that we must unite to fight against,” Mahama observed in his address at the Closing ceremony of the Conference of West African Catholic Bishops.

Al-Qaeda in the Maghreb recently attacked the Radisson Blu hotel in Mali and took several innocent lives, and just recently, they struck in Ouagadougou and again claimed many lives.

This makes terrorism a real and substantial threat to our countries in West Africa, noted the Ghanaian leader.