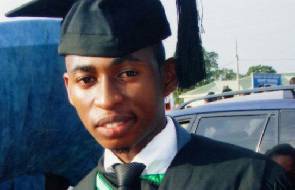 It has emerged that one of the Muslim youth that allegedly joined the swelling ranks of the dreaded Islamic State in Iraq and Syria (ISIS) is capable of manufacturing bombs.

Abukakar Mohammed, aka Brother, reportedly used to pick bomb-making tips from his computer to the amazement of his friends.

He is believed to be resident at Cow Lane in Accra Central and studied at the Kwame Nkrumah University of Science and Technology (KNUST) where he obtained First Class in Nuclear Physics.

His father is said to have collapsed upon hearing that his son had joined the notorious Islamic sect whose stock-in-trade is public beheading of their opponents or those they regard as infidels.

He is said to have told the dad via a text message that they would meet in paradise, reportedly leading to the man collapsing.

His father is also said to have even sold his house in order to fund the boy’s education due to his brilliance, only for Abubakar to turn against him after some years at the University.

He was seen using his laptop to assemble bombs and detonate them on the computer to the amazement of his parents.

Attempts to speak to the father were unsuccessful as he declined to respond.

News about a 25-year-old graduate, Nazir Nortei Alema, also from KNUST, purportedly joining ISIS recently spread like wildfire and has attracted both national and international concern.

The report on the departure of Nazir Nortei Alema blew off the lid over the ISIS recruitment drive in Ghana.

A key agent allegedly doing the recruitment for ISIS was identified as Badhan Diallo, believed to be a Guinean, who was at the University of Ghana but purportedly left to join the terror grouping a few months ago.

Apart from Alema and Abubakar, other persons suspected to have joined the terrorists include one Rafik and a Tema-based lady called Shakira Mohammed, even though other sources claimed the Muslim youth are joining ISIS in droves and that more than 10 joined in May 2015 alone – a report still unconfirmed by the National Security.

DAILY GUIDE learnt that there is a group of young Muslims at KNUST who express extremist views, are always seen together on campus, and Nazir Nortei Alema and Abubakar Mohammed were said to be key members.

They are believed to be living together in a hostel outside the campus and do not allow anybody to infiltrate their ranks easily.

Other private Islamic institutions, particularly at tertiary level, are said to be having students who exhibit extreme religious tendencies towards people who do not share their views.

The National Security has been able to confirm the subtle attempt to recruit Muslim youth to join terror cells in the Middle East, but they have assured that there should be no cause for alarm.

“There is no reason to fear. The ISIS recruitment could go up instead of coming down, but currently the number of those who have joined them is only a handful,” National Security Coordinator Yaw Donkor assured when he met some selected editors in a maiden engagement since the ISIS story broke.

He admitted that platforms created on social media were the main means of reaching out to those subscribing to the ISIS mentality.

Another reason why there should not be excessive fear about ISIS threat in the country is that “The current direction is outward. It is only when they are returning here that we should worry,” he said.

It emerged at the meeting that the ISIS recruits were believed to travel by land through Niger where the group is said to have a training camp, before dispatching them to their final destinations where they carry out their insurgency.

“I can confirm the DAILY GUIDE story. Nazir and Shakira are gone. We are following other names,” he said.

Yaw Donkor, exuding a reassuring confidence as he was supported by the National Security Advisor, Isifu Baba Kamara, cautioned the media and Ghanaians in general against stereotyping when dealing with the ISIS issue because “we are all potential recruits.”

He said the issue should not be limited to the Islamic community because it goes beyond that, adding that even before matters got to this stage, the National Security Council had undertaken outreach programmes to alert people about the security threats posed by religious zealots.

While pointing at the negative role of social media in the matter under review, he explained that not all members of such groups share extremist views.

Mr Donkor disclosed that there is a school in Niger where ISIS recruits undergo preliminary training before departure to their final destinations.

He pointed out that ISIS disciples become potential terrorists only when they leave the country, explaining that when such persons are here little or nothing is known about them until they depart. Under such circumstances he asked, “What do we do?”