You are here: Home / Europe / Germany to increase security, espionage 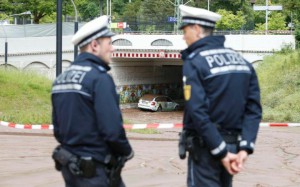 The draft budget is a response to growing security threats and the influx of hundreds of thousands of migrants in recent years.

Part of the money will be used to create 4,300 new positions at Germany’s police and security forces by 2020, the news agency dpa said.

The Welt daily reported that members of Parliament’s budget committee also agreed to double planned staffing for a new agency designed to break encrypted communication to 120.

An additional 1.1 billion euros ($1.2 billion) will be spent next year on humanitarian aid and programs designed to combat the causes of migration. The sum is dwarfed by the 22 billion euros that Germany expects to spend supporting hundreds of thousands of people who claimed asylum in the country over the past year. Many fled hardship and wars in Syria, Afghanistan and Iraq.

The budget committee agreed to inject an additional 40 million euros into a program designed to help people whose asylum requests have been turned down.

Separately, German daily Sueddeutsche Zeitung reported Friday that the country’s BND spy agency is to receive its own dedicated satellite.

Until now the agency has relied on satellite imagery taken by the German army or allied intelligence agencies.