You are here: Home / Africa / Germany takes over command of EU training mission in Mali 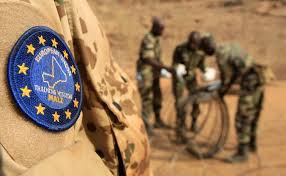 Germany has now replaced Spain as the country in command of EUTM. Spain had previously occupied this role under General Alfonso Garcia-Vaquero Pradal.

About 600 EU military specialists have been providing enhanced combat training to Malian troops since 2013. The EUTM specialists come from 24 European nations, 160 of them are from Germany. Germany’s Brigadier General Franz Pfrengle will now be the mission’s commander for the next ten months.

The defense ministers of Spain and Austria, Pedro Morenes Eulate and Gerald Klug, were also present in Bamako to witness the handover.

Ursula von der Leyen said Europe knows “what is at stake” in Mali. After a meeting with her Malian counterpart Tieman Hubert Coulibaly, von der Leyen said if the mission succeeds, Mali will become “an anchor of stability” in the region.

Coulibaly stressed the need for Mali “to begin with the disarmament and demobilization process in order to re-integrate former combatants.”

Germany’s lower house of parliament, the Bundestag, has extended the mandate of the Bundeswehr in Mali to 2016 and increased the number of German soldiers from 150 to 350.

Mali’s defense minister said Bamako already has “a close cooperation” with Berlin. “We have at least 400 personnel who have received training in Germany. There’s a bilateral program between Germany and Mali that also involves the training of the national gendarmerie,” Coulibaly said.

Prior to the handing over ceremony, von der Leyen met with representatives from the country’s troubled north. The discussion was centered on weapons and drugs trafficking by radical Islamist groups, who rely on the trade to finance their activities.

Extremist groups have succeeded in recruiting many young Malians, who have lost hope of finding work at home. Instead, they make the dangerous journey through the desert and then across the Mediterranean Sea to seek greener pastures in Europe.

Von der Leyen said that making Mali a safer and more prosperous place will ensure “people do not consider taking the perilous journey to Europe.”

“They can realise that that they have prospects in their home countries and will not seek their future in Europe”, she said.

The rise of the Tuaregs

Mali’s north was completely overrun in 2012 by Tuareg rebels known as Ansar Dine and two other jihadist groups, al Qaeda in the Islamic Maghreb and the Movement for Oneness and Jihad in West Africa.

In response to a call for help from the government in Bamako, French forces carried out operations throughout the country and pushed the rebels back into smaller pockets of territory.

On 18 February 2013, at the request of the Malian authorities, the European Union launched a military training mission for the Malian armed forces with an initial mandate of 15 months. The EUTM, under the command of Spanish General Pradal, trained over 5,500 Malian soldiers at the Koulikoro training camp near Bamako.

The troops have been taught to clear mines and detect booby traps and unexploded bombs. The Malians now have the capacity to construct and dismantle roadblocks and have improved their communications.

Earlier this month, Malian troops said they killed several jihadists near the country’s southern border with Ivory Coast and destroyed the insurgents’ camp.

But the German defense minister said there is still a long way to go “before the Malian armed forces can undertake the security of the country on their own.”

The United Nations peacekeeping mission to Mali (MINUSMA) has over 11,000 troops stationed in the north of the country. But Lieutenant Colonel Markus Milde, a German officer with MINUSMA, said they do not have enough troops to go out on patrols.

“We are building the barracks at the moment,” he said. “This will take a few months, but once we are finished we will begin to send troops out.”