You are here: Home / Europe / Germany: Syrian refugee on trial over anti-Semitic assault 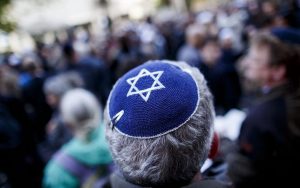 A 19-year-old from Syria is on trial in Berlin over an assault in the German capital on an Israeli wearing a skullcap.

The young man is charged with bodily harm and slander. The April 17 attack caused nationwide outrage and fueled concerns over anti-Semitism in Germany.

The victim, an Arab Israeli who has said he isn’t Jewish but wore the skullcap as a personal experiment, caught the assault on video, showing the attacker whipping him with a belt while shouting “Yehudi!” — Arabic for “Jew.”

Prosecutors say the suspect was assigned to a home for refugees outside Berlin, but lived in the city without a fixed address. He turned himself in two days after the assault.