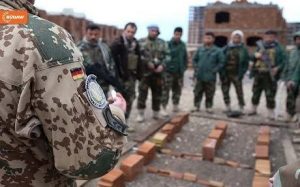 Germany has decided to extend the deployment of its armed forces in the Kurdistan Region, but Berlin is expressing concern about the situation between the regional and central governments in Iraq and will continue to pause training for the Kurdish Peshmerga, like reported by rudaw.net.

“We had agreed last Friday with the foreign office to pause the training so no wrong signal would be sent,” Defense Minister Ursula von der Leyen told reporters on Wednesday, according to Germany’s press agency DPA. “We are concerned about the current confrontation between Kurds and Iraq’s central government.”

About 130 German soldiers are based at the international anti-ISIS Combined Joint Operations Command Center, where they have worked with Iraqi and Kurdish commanders, in addition to Peshmerga units through the Kurdistan Training Coordination Center (KTTC).

The parliament in Berlin must reauthorize troop deployments yearly. Germany’s new government is not expected to be formed before the end of December because it is an election year.

The left-leaning Social Democratic Party (SPD), one of the country’s two largest political parties, doubts the anti-ISIS training for Peshmerga will be permanently withheld.

“We have agreed to the short-term extension of the [deployment] mandate on Wednesday,” Wolfgang Hellmich, the chairman of parliament’s defense committee, told DPA.

The German politicians are concerned about getting pulled into a domestic conflict.

“But we have questions and need for clarification regarding the situation of the soldiers,” said Hellmich.

The US-led Coalition backed the Peshmerga who provided security for locals and manned a frontline against ISIS from 2014 until the group’s defeat in northern Iraq this year.

Berlin’s decisions come after Iraqi armed forces, including its Iranian-backed Hashd al-Shaabi paramilitary units, have taken control of the areas claimed by Baghdad and Erbil. There were casualties reported on both sides, tens of thousands of people displaced, and uncertainty for people in the diverse Kurdistan Region.

The Region, with a population of just over 5 million, has sheltered more than 1.8 million displaced Iraqis and Syrian refugees since 2014. Many foreign humanitarian and other workers resided in the safety of the Kurdistan Region and would travel to the less-safe disputed provinces.

Baghdad has issued more stringent travel and immigration policies after the Kurdistan Region included the disputed areas in the September 25 referendum on independence.

“In this explosive situation, we call on all parties to be prudent and speak directly; military action must be stopped immediately and further escalation measures avoided,” read a statement from Berlin regarding the call.

Germany has been one of the main backers of the Kurdish Peshmerga since the start of the ISIS war, providing the effective armor-piercing Milan missiles, rifles, training, and air reconnaissance.

German support for the Kurds was prompted in 2014 when Leyen pleaded with lawmakers for support citing violence against Yezidis in the disputed Shingal region that has since been labelled genocide by the United Nations.