You are here: Home / Europe / Germany ready to send helicopters in Mali 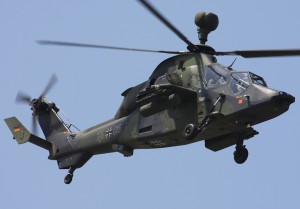 Germany has agreed in principle to send military helicopters to Mali to help a U.N. peacekeeping mission seen as vital to counter Islamist militancy and tackle the migration crisis, it said on Wednesday.

It will provide the aircraft if no other country comes forward to replace seven transport and attack helicopters being withdrawn by the Dutch military early next year, Defence Ministry spokesman Jens Flosdorff said.

U.N. peacekeepers, including 570 Germans, are deployed across northern Mali, a vast region that was occupied by separatist Tuareg rebels and al Qaeda-linked militants in 2012 before a French military intervention in 2013.

Sending the aircraft would be a significant step for Germany which has taken on increased military responsibilities in recent years but focused on training, surveillance and medical missions after maintaining a mainly pacifist stance since World War Two.

“We support this because of our conviction that it is important to stabilise Mali,” Foreign Ministry spokesman Martin Schaefer told a regular government news conference.

“The goal is to fight Islamist extremism. It’s about stabilising Mali to limit the flow of migration out of and through Mali.”

Schaefer said no final decision had been made and details would still need to be worked out with the United Nations. He declined to say how many helicopters or troops Germany would deploy if no other country comes forward, as looks possible after months of fruitless requests for help from the UN.

Germany would not, however, agree to an open-ended deployment. “If we agree to go in, it’s important to us that there are clear agreements about when we can get out,” he said.

Mali has become the deadliest place to serve for U.N. peacekeepers and more than 100 have been killed since the U.N. mission MINUSMA deployed in July 2013. The U.N. Security Council voted in June to increase the contingent by 2,500 troops, to more than 15,000.