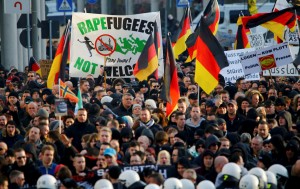 Police in Frankfurt have launched an investigation after a German newspaper published allegations of Cologne-style sex attacks in the city during New Year celebrations, like reported by independent.ie .

‘Bild’, Germany’s highest-selling newspaper, claimed a mob of some 900 drunk asylum-seekers assaulted women on one of the city’s best known shopping streets.

But police said yesterday no complaints or crime reports had been filed and they had no evidence of any assaults almost six weeks after they are alleged to have taken place.

‘Bild’ published interviews with a woman who said she was the victim of an assault and a bar owner who said his bar was overrun by some 50 North African men who attacked women.

But several other restaurant and bar owners in the area claimed they had seen nothing out of the ordinary that night.

Jan Mai said he had initially wanted to keep his bar out of the news but had decided to come forward after Frankfurt authorities claimed New Year’s Eve had been peaceful in the city.

He denied claims he had been politically motivated after the German press published details of posts on his Facebook page saying “Merkel must go” and expressing support for far-right parties.

“I was lucky I was wearing tights,” the 27-year-old woman, named only as Irina A, told the newspaper. “They grabbed me under my skirt, between my legs, my breasts, everywhere. Me and my girlfriends. More and more of these guys came. Their hands were everywhere.”

The assaults are alleged to have taken place in the area around Fressgass, an upmarket shopping street that is also known for its nightlife. ‘Bild’ claimed a group of around 900 drunk asylum-seekers who had travelled into Frankfurt from smaller towns for New Year celebrations headed for the area after they were blocked from entering the city centre by police.

“When I came in, the whole place was full with a group of around 50 Arabs,” Mr Mai, the owner of the First In bar, said.

“They didn’t speak German, took drinks from customers, danced at them. Women asked me for help because they were being attacked. The mood was getting out of control.”

Mr Mai said he called police but by the time a patrol car arrived the men had moved on. At around 3am they returned. “Drunk North Africans were throwing chairs and bottles at customers and staff” in a nearby café, he said.

When he tried to clear his own bar, “one of them grabbed a knife from the counter and wanted to go for us”. None of the claims appear to correspond to police reports of the night, which logged only two arrests for bodily injury in the area. “We have no matching reports,” a police spokesman said.

The allegations are disturbingly reminiscent of the Cologne sex attacks of New Year’s Eve 2015, in which more than 1,000 women were assaulted in the area around the central station.

Details of the Cologne assaults did not emerge for several days, and police at first claimed the night had been peaceful.