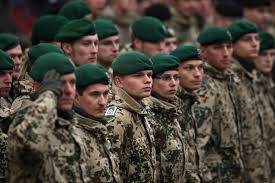 German Foreign Minister Frank-Walter Steinmeier announced on October 15 that Germany was considering sending troops in support of the United Nations-led efforts to restore peace and stability to the northern Mali area by the beginning of 2016. A recent fact-finding delegation sent to Mali to examine the needs of the area confirmed that the Bundeswehr should prepare “for a self-reliant and robust mission.” The army would face “considerable or high levels of threat,” the delegation concluded—according to the Suddeutsche Zeitung. Just across the border from Algeria, this area is a hotspot for Islamic terrorism in North Africa resulting in this being one of the more dangerous missions Bundeswehr is involved in.

This proposed involvement in the region comes following a request for support by the Netherlands, which currently has peacekeeping forces stationed as part of the UN mission in the area. This request comes as the Dutch are in the process of integrating around one third of their army with the German Army. The Dutch Army is made up of three brigades, plus support staff and special forces. One of those three brigades, the 11th Airmobile, is being integrated into the German Army, marking the first time that a European country has handed part of its army over to another country. This request for German support in Mali is a prime opportunity for both armies to further integrate and work more closely together.

Germany is currently involved in more than a dozen military missions throughout the regions—mostly around North Africa and the Middle East. Defense Minister Ursula von der Leyen has said that Germany needs to play a bigger role in the UN peacekeeping missions, adding that Germany has “key capacities and capabilities which other nations do not have.” This increased German military involvement in the world and closer integration with the Dutch Army supports statements from von der Leyen earlier this year that “a European army is the future” and is in agreement with Chancellor Angela Merkel’s calls for “deeper military cooperation in Europe.”

If this goes ahead, it will be the most significant actions von der Leyen has taken to back up her words. Many of the Army’s deployments are relatively safe. No German soldier was killed in 2014 while deployed abroad, for example. But this latest Mali mission could prove more dangerous.

Several German leaders, like von der Leyen, have made big statements about reviving Germany’s military. Now, they are gradually backing up those statements with action.