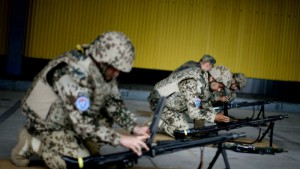 Germany’s new civil defence plan is a “major step” towards preparing authorities and the public for changing security threats, the country’s interior minister said Wednesday, as he dismissed reports about the return of military conscription.

Thomas de Maiziere was presenting the plan – intended to prepare Germany in the event of terrorism, cyberwarfare and attacks on critical infrastructure – at a water supply facility in Berlin after Chancellor Angela Merkel’s cabinet approved it earlier in the day.

“We all hope that we will be spared larger crises,” de Maziere said, adding that it was nonetheless necessary to prepare the country “appropriately and in a level-headed manner.”

The plan provides guidelines for government conduct in emergency situations including technical and personnel provisions and rules on how to issue warnings to the public in the case of an acute threat, the minister said.

It requires civilians to stockpile food and water for use during emergencies, sets security requirements for the operators of critical infrastructures such as water and electricity supply facilities, and boosts capacities in the healthcare system, de Maiziere said.

De Maiziere dismissed media reports that the plan would facilitate the return of compulsory military service, which was phased out in Germany five years ago.

The plan merely requires the public to perform minor civil duties in support of troops, such as directing traffic, delivering post and providing fuel and accommodation, he said.

Germany is considering new security strategies after two terrorist attacks and a mass shooting last month, as well as tensions between the NATO military alliance and Russia over the 2014 annexation of Crimea and Moscow’s military involvement in eastern Ukraine.

De Maiziere has come under fire for introducing the plan just a month after the attacks, with opposition parties referring to the initiative as deliberate fearmongering by the government ahead of state elections.

The timing of the civil defence measures is “totally misguided” because it “increases uncertainty” at a time when public fears about a terrorist threat are high, said Thomas Oppermann, the head of the Social Democrats’ parliamentary group.

De Maiziere responded to the criticism by saying the civil defence review had been initiated in 2012 and it was pure coincidence that the Interior Ministry had completed the review in the wake of the attacks.

The last civil defence review was conducted in 1995 against the backdrop of German reunification and the end of the Cold War.