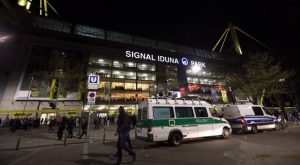 Police are examining two letters recovered following the Borussia Dortmund bus attack amid claims the incident is linked to Islamist terror, like reported by belfasttelegraph.co.uk .

Defender Marc Bartra was injured in the attack, which left him requiring surgery on a broken bone in his wrist.

The tie was subsequently postponed for 24 hours.

German media reported the presence of two letters which detectives are now poring over in the hope it will provide clues as to the motive and those responsible.

But they have warned the letters may be an attempt to mislead the investigation, which is being conducted by federal prosecutors who usually investigate serious crimes such as terrorism.

According to Suddeutsche Zeitung and German press agency Dpa, a letter found near the scene referred to 2016’s attack on a Berlin market which was carried out by a Daesh-inspired terrorist and the fact that German surveillance aircraft are being used in Syria.

The letter reportedly written in German began: “In the Name of Allah, Most Gracious, Most Merciful.”

It allegedly claimed that German warplanes are involved in murdering Muslims in the self-declared caliphate of the Islamic State group.

It also said sports stars and other prominent people “in Germany and other crusader nations” are on a “death list of the Islamic State”.

The letter, published online, said the threat against high-profile public figures will last until German planes are withdrawn from the war zone, and the US air base at Ramstein, near the French border, is closed.

Football fans are not mentioned as targets, and there is no signature.

The newspaper quoted security sources stressing that the letter and any Islamist link had not yet been been verified.

Police are also looking at the authenticity of a second letter claiming responsibility which, it said, could have come from anti-fascists.

The club has previously sought to clamp down on far-right groups in its fan base.

Social workers were brought in to deal with neo-Nazi activists amid unrest over immigration levels in the Ruhr Valley, in the west of the country.

In a defiant statement on the club website, Dortmund chief executive Hans-Joachim Watzke said: ” We want to show that terror and hatred can never dictate our actions.

“I just appealed to the team in the changing room to show society that we do not bend before terror.”