You are here: Home / Europe / Germany hit with wave of Islamic terror as Parliament rejects restrictions on migration 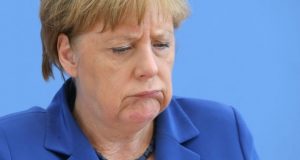 Germany has been hit with a series of terror incidents across multiple cities and police have acted preemptively after receiving tips warning of further, more devastating attacks. As the attacks occurred, the country’s parliament moved to reject firmer controls on migration, like reported by.zerohedge.com.

On March 9, 2017, a gang of men targeted commuters at Düsseldorf train station in an axe attack that left five injured. Two attackers were arrested and several others were said to be on the run. Just hours later, an elderly man was attacked with a machete at a car park outside Dusseldorf. Authorities stated that they did not believe the two attacks were connected. The next day, two “youths” attacked a train in Hamburg with a toxic chemical substance. Several adults and two young children were injured and received medical attention at the scene. The attack is the latest in a series of chemical terror incidents reported in Europe by Disobedient Media over the past several months. Saturday, police in the city of Essen shut down the Limbecker Platz shopping center after being tipped off that it was the imminent target of multiple suicide bombers. On March 12, 2017, German newspaper Bild reported that an Egyptian asylum seeker left four injured in a stabbing spree sparked by an argument over an unpaid bar tab. The spree of incidents occurred in less than a week’s time.

In the midst of the spike in terror attacks, the German parliament blocked plans to make it easier for the government to deny asylum requests from Tunisian, Algerian and Moroccan migrants on the grounds that their home countries are deemed safe. Migration from North Africa became an important issue in Germany after hundreds of women were sexually assaulted during the 2016 New Year’s Eve celebrations in Cologne and elsewhere by rampaging mobs of migrants from Algeria, Morocco and Iraq. The wave of attacks comes after a number of German counter-terror failures last year, where officials failed to prevent infiltration of their intelligence agencies by ISIS operatives and repeatedly ignored tips from Moroccan officials regarding the Berlin truck attacker Anis Amri.