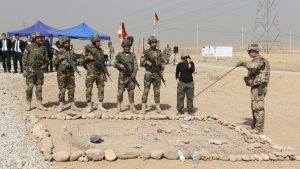 The Jordan-based Tornado reconnaissance aircraft and German refueling aircraft for anti-IS missions will continue to operate through March 31 next year.

The international coalition’s work has been “bearing fruit” with the terrorist group’s widespread defeat in Iraq, according to  Demmer. The mission caps German military participation at 700 troops.