The German federal police are expanding their anti-terrorism unit GSG 9 and installing a special squad in Berlin. The move is a reaction to ongoing terrorist threats in the capital, like reported by dw.com 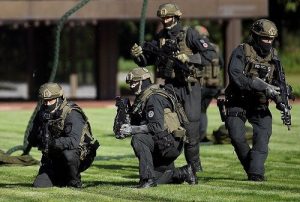 The federal police squad that deals with terrorist attacks is to become significantly larger, and will set up a second base in Berlin.

“We’re talking about around a third of the current strength of the unit,” GSG 9 commander Jerome Fuchs told Berlin state broadcaster RBB on Monday, before adding that finding the right personnel would be a “big challenge,” and that “fitness, strength of character, and teamwork” were particular features.

Fuchs added that the decision had been made because of an ongoing terrorist threat in Germany, and especially in Berlin, which saw its first major attack in December 2016, when Tunisian national Anis Amri drove a truck into a crowded Christmas market, killing 12 people.

“If you look at comparable terrorist situations across Europe, then it was often capital cities that were affected,” Fuchs told the station. “It is essential that we are better prepared in the capital. Our aim is clear: GSG 9 needs to be capable of quicker reactions in the capital.”

The unit’s current base is in St. Augustin, near the old German capital Bonn, where it was founded in 1972. GSG 9 – which stands for Grenzschutzgruppe 9 (“border protection group 9”) was created as a direct reaction to the kidnapping and murder of Israeli athletes at the Munich Olympics that year when the police’s handling of the event received much criticism.

Its most famous operation was the liberation of over 80 hostages from a Lufthansa passenger jet in Mogadishu in 1977, which had been hijacked by the Palestinian terrorist group PFLP. Since then, according to Fuchs, GSG 9 has carried out over 1,900 operations, or about 50 a year.