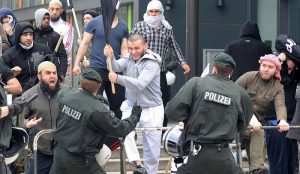 Angela Merkel’s government is considering legislative changes so authorities can confiscate the German passports of citizens that are dual nationals suspected of terrorism, like reported by thenational.ae.

A junior Interior minister, Stephan Mayer told German reporters that he was proposing an “urgent” change to the law. Depriving a German of citizenship has been prohibited under Germany’s post-war constitution.

Mr Mayer, described as a law-and-order hardliner within Mrs Merkel’s centre-right party, has said that confiscation of German passports of alleged extremists was his “pressing goal”. Mr Mayer did not respond to an emailed request for comment from The National.

As many as 4.3 million Germans hold two or more passports, the Bonn-based Centre for Political Education said citing census figures. The most common second passports are Russian, Polish and Turkish.

Mr Mayer’s comments came after Sunday’s arrests of six men suspected of plotting a possible attack on the Berlin half-marathon. While authorities said the men, aged 18 to 21, displayed a suspicious level of interest in the race, they were released on Monday. No explosives were found in the suspects’ homes and there was no indication of a concrete plan.

“There were concerns that the UK could use the mechanism to strip a dual national of their UK nationality while engaged in suspected terrorist activities overseas, and then absolve itself of responsibility towards its national in the event of, for example, a drone strike,” Mr Murray said.

The issue of depriving terrorist suspects was also a very controversial issue in France in the last year of Francois Hollande’s government, Mr Murray added.

“The proposal, following the Bataclan and other Islamist attacks, was to strip dual nationals involved in terrorism of their French nationality. This was seen as controversial as the vast majority of French dual nationals are French-born descendants of North African immigrants. It was seen as saying that one set of French citizens’ had a less secure grasp of French citizenship than their sole-national compatriots. Ultimately the justice minister Christiane Taubira resigned over the issue,” Mr Murray said.

“One would imagine that similar issues are at stake here: the responsibility to citizens overseas and the implications for the wider dual-national population.”

Mr Mayer also hinted to journalists that Georgia and Armenia could be added to Germany’s list of countries where would-be asylum seekers are presumed safe. The move would accelerate the processing of asylum applications. In 2017, 3,462 Georgian citizens and 3,857 Armenian citizens applied for asylum, the Federal Office for Migration and Refugees said.

Members of the far-right Alternative for Germany party argue that Germany’s security situation has worsened since Ms Merkel allowed about one million refugees to enter in 2015 and apply for asylum.

In one such incident, a 26-year-old Palestinian asylum seeker was sentenced to life in prison in March for murdering one man and wounding six others in a Hamburg knife attack. The court described the crime as an Islamist attack.

Alternative for Germany is promoting an agenda that includes retracting German citizenship within 10 years of its acquisition in cases of substantial criminality, participation in a terror organisation and membership in a criminal organisation.

Article 16 of Germany’s Basic Law states “No German may be deprived of his citizenship. Citizenship may be lost only pursuant to a law, and against the will of the person affected only if he does not become stateless as a result.”