You are here: Home / Europe / Germany considers return of conscription for civil defence 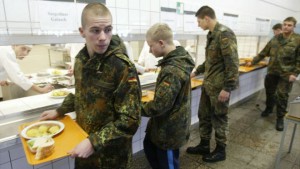 Germany may reintroduce a form of national service for civilians to help the army deal with a future disaster.

The role of civilians is part of a new civil defence strategy to be discussed by the government on Wednesday.

Since the strategy was leaked to the media there has been intense debate about stockpiling food and water.

In a crisis civilians might be obliged to help direct traffic or provide fuel and accommodation for the military, German news agency DPA reported.

Germans appeared generally unfazed by what some MPs have called government “scaremongering” but the word “Wehrpflicht” (conscription) was trending on social media on Tuesday.

The topic of civil defence also boosted the popularity of hamsters on social media, as Germans, with more than a hint of irony, adopted the hashtag “Hamsterkaeufe”, which means panic-buying or hoarding like a hamster.

Germany’s Die Tageszeitung daily sported a big picture of a hamster on its front page, with the headline “The End is Nigh” – which was widely tweeted.

A satirical article in Die Welt (in German) joked that “Hamsters are sold out in Germany”. It said the lack of hamsters presented the nation with “an unprecedented humanitarian disaster”.

The article was bylined, in English: “Jean Gnatzig, Head of Silly Content”.

The government said a national disaster was “unlikely” but preparations were needed in case of a future terror attack or “hybrid” conflict involving cyber warfare, which could damage key infrastructure.

Russia’s military intervention in Ukraine in 2014 – the clandestine seizure of Crimea and support for separatist rebels – has been widely described as “hybrid warfare”.

Germany scrapped compulsory national service in 2011, but provision for it remains in the constitution, so it could easily be reinstated, DPA says.

During the Cold War, national service meant that West Germany could mobilise 495,000 soldiers and boost the numbers to about 1.2m if necessary by calling up reservists.

School leavers had the option of doing 18 months’ civilian service – for example in a hospital – instead of nine months in the military.

The new civil defence plan includes advice for citizens to store enough food to last 10 days, because emergency services might be fully stretched dealing with a major disaster.

A public health manager with the German Red Cross, Wolfgang Kast, told the broadcaster ARD (in German) that the intense debate about stockpiling showed that “people have become less and less prepared for an emergency”.

“We’ve got accustomed – not least because of the internet – to having everything available at all times,” he said.

He listed as key emergency provisions: water, noodles and tomato sauce, along with any required medicines, a torch, spare batteries and candles.

On its website the German Federal Office of Civil Protection and Disaster Assistance (BBK) gives citizens a survival list for emergencies, enough to last two weeks. The list includes: