You are here: Home / Europe / Germany calls for Syria transitional government with Assad 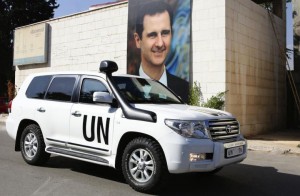 Germany called for a transitional government in Syria in a bid to resolve the country’s years-long civil war, as European governments increasingly soften their demands over President Bashar al-Assad’s departure.

German Foreign Minister Frank-Walter Steinmeier mooted talks between regional actors, European countries, the United States and Russia “towards the foundation of a transitional government”, which he said “would already be a lot”.

“We must find a common interest between the different positions, between those who would absolutely talk with Bashar al-Assad, and those who say, ‘we will not discuss anything until he departs’,” he said.

Steinmeier’s French counterpart Laurent Fabius on Saturday did not list Assad’s departure as a precondition for talks, and the BBC has reported that British Prime Minister David Cameron is expected to drop his opposition to Assad playing a role in a transitional government.

The latest remarks were another sign of momentum appearing to be building behind the idea of leaving Assad in place while a political solution to the conflict is sought.

Steinmeier’s remarks followed comments by German Chancellor Angela Merkel who said last week that Assad should be involved in any Syrian peace talks.

The German foreign minister sought to nuance those comments on Sunday, saying that Merkel “did not say she or the German government would speak with Assad”, but that could fall to UN mediator Staffan de Mistura.