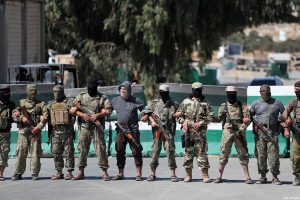 The two men, identified as Khedr A.K. and Sami A.S., are accused of having “jointly killed a person protected under international humanitarian law”, resulting in their arrest and the search of their apartments in the German town of Naumberg and the city of Essen.

According to the prosecutors, Khedr A.K. joined the group named Gjurabaa Muhassan prior to July 2012, which was an affiliate of the organisation then known as Jabhat Al-Nusra and now called Hay’at Tahrir Al-Sham (HTS).

Both suspects are said to have participated in a video in which a lieutenant colonel in the Syrian regime army was executed by the opposition group on 10 July 2012, with Khedr A.K. reportedly having guarded the prisoner and kept his hands bound before Sami A.S. recorded the video while commentating on the shooting of the soldier “in a glorifying manner”.

HTS, which has become the most dominant rebel group within the opposition-held areas of Idlib province and the areas surrounding it over the past year, is reported to have been affiliated with the designated terror organisation Al-Qaeda back in the early days of the Syrian revolution.

The arrest of the two Syrians comes at a time when the German security services have been cracking down on some Syrian refugees and migrants who were formerly part of both the regime and opposition forces, and particularly on those who committed human rights violations throughout the ongoing Syrian civil war.

It comes amid the recent arrests and trials of former Assad regime intelligence officers and doctors who were responsible for the mass torture and killings of Syrian detainees and civilians. Such figures, some of whom are still in touch with the regime and reportedly pass on information on dissidents, are suspected of forming a much higher number in Germany than previously thought.