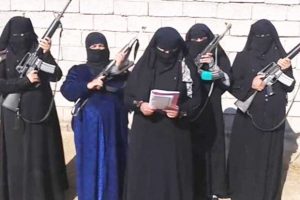 German authorities say they have arrested a 27-year-old German woman suspected of being part of the so-called Islamic State group’s “morality police” in Iraq, like reported by abna24.com.

Federal prosecutors said Monday that Jennifer W. traveled to Iraq via Turkey and Syria in September 2014, where she joined the extremist group.

In a statement, prosecutors said she patrolled parks in Fallujah and Mosul, ensuring that women adhered to the dress and behavior codes imposed by IS.

W., whose surname wasn’t released for privacy reasons, was arrested by Turkish police in January 2016 after applying for a passport at the German embassy in Ankara. She was deported to Germany days later.

Prosecutors said she was arrested in southern Germany on Friday and her home in northern Germany searched. She’s accused of membership in a foreign terrorist organization.