You are here: Home / Europe / Germany, a new safe haven for Islamist terrorists 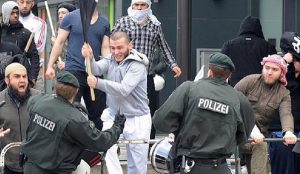 After the defeat of Daesh by the international coalition, no less than 500 fighters of the Islamic State managed to flee via Turkey, Syria and Iraq, towards Europe, according to the investigative program de the French TV channel M6 Enquête exclusive.

These seasoned terrorists have settled in some European countries with a predilection particularly for Germany.

After they were arrested for a short time by the German security services, several Jihadists of the Islamic State are today living in Germany unbothered.

They managed to pose as asylum seekers, and the multiple overwhelming evidence of their barbaric acts has not stirred any curiosity nor emotion among the German police, who persist in considering them as mere refugees, unrelated to terrorism.

This is the case of an extremist named Samir who joined ISIS in 2014. His hobby was to play football with the heads of his victims which he used to display like trophies in overwhelmingly awful videos.

Currently, this bloodthirsty individual is settled with his wife in a Land near the border with France, and is trying to get a truck driving license. A type of vehicle that brings back to mind sad memories, as a truck had been used by Tunisian terrorist El Amri, in December 2016 in the attack against the Christmas market in Berlin.

The attack had killed 12 people of different nationalities and seriously injured more than 50.

History will remember that despite the accurate information provided 4 months earlier by Morocco about the perpetrator of this attack, the German security services knowingly chose to ignore them.

The other active ISIS member mentioned in Enquête exclusive is named Majid. He was active in the Islamic State’s pseudo finance ministry.

Just like Samir, Majid was never bothered despite the substantiated testimonies provided to the German authorities on his documented relationship with the ISIS staff.

Moreover, both Jihadists benefit from the protection of these very German authorities.

The situation raises a number of questions, mainly whether German authorities do not realize the extreme danger posed by these terrorists, adept of infiltration and clandestine methods, to the security of their own country and that of other states.

Or whether the German federal services are attempting to strike deals with these terrorists on some operational collaboration.

Actually, it was on German territory that the genesis of the attacks of September 11, 2001 began within the framework of the infamous Hamburg cell. Two of its suicide bombers, Mohammed Atta As-Sayed and Marwan Yousef al-Shehhi, threw planes on American soil causing the death of several thousand victims.

The fact remains that German officials’ strange attitude leaves their international allies a bit puzzled. These allies, among the most reliable in the fight against terrorism, do not understand Berlin’s manifest rupture with the multilateral framework of security cooperation.

Another concrete example of this rupture is embodied by the divergence between Germany and Morocco over the Moroccan terrorist, Mohammed Hajib, who has never renounced his allegiance to Al-Qaeda.

The current situation in Germany is reminiscent of that of Londonistan before the bloody attacks that struck the British capital on July 7, 2005, with a death toll of 52.

Germany, because of its security strategy, could become Germanistan, endangering the security of the countries of the European Union and of the region as a whole.