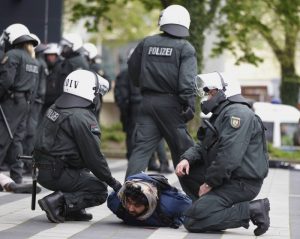 German police have arrested six alleged ISIS plotters amid fears they were planning to launch an attack on a Christmas market, like reported by dailymail.co.uk.

The Syrian men were arrested during raids involving 500 officers in the towns of Kassel, Hannover, Essen and Leipzig.

There are reports they were plotting a co-ordinated attack on a Christmas market in Essen in the country’s north west using ‘weapons and explosives’.

The six were identified as Syrian citizens aged between 20 and 28 who arrived in Germany as asylum-seekers between December 2014 and September 2015.

Their names were withheld under strict German privacy laws.

The men, who are allegedly members of ISIS, are accused of ‘having prepared an attack with weapons and explosives on a public target in Germany.’

Prosecutors refused to give further details, citing the ongoing investigation, but said the men had not yet finished preparing their attack.

Germany remains on high alert after a year of terror-related bloodshed in 2016.

In December, 12 were murdered when an ISIS fanatic ploughed a lorry through Berlin’s Breitscheidplatz Christmas market.

Concrete blocks have been installed around Christmas markets at several central squares in the capital this year before the festive season opens in a couple of weeks.

In July 2016, a 27-year-old Syrian detonated an explosive device outside a music festival in the southern town of Ansbach, killing himself and wounding 15.

Domestic security officials estimate there are some 10,000 radical Islamists in Germany, with roughly 1,600 among them suspected of being capable of violence.