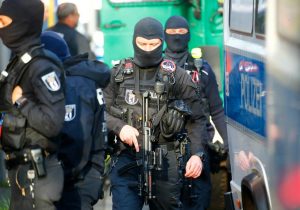 German prosecutors said Monday they have charged five Tajik men with being members of the Islamic State group, accusing them of participating in a cell of the extremist organization in Germany, like reported by dailymail.co.uk.

Federal prosecutors filed the indictment at the Duesseldorf state court, where an alleged associate of the five was convicted last month of membership in IS for co-founding the German cell and supporting two planned attacks. He was sentenced to seven years in prison.

The suspects now charged were identified only as Farhodshoh K., Muhammadali G., Azizjon B., Sunatullokh K. and Komron B., in keeping with German privacy rules.

Prosecutors say that Azizjon B. administered propaganda channels and helped collect money for a Russian- and Tajik-language IS online network. They say he also personally recruited IS members, leading to the founding of a cell in western Germany in early 2019 that aimed to carry out attacks in Germany.

The rest of the accused – along with Ravsan B., the man convicted last month – are alleged to have belonged to that cell.

Prosecutors say that they trained their military skills in paintball games, and that participants in those included “other people from the Islamist scene” who were in contact with the gunman who killed four people in an attack in Vienna in November. They also allegedly acquired components for an “unconventional” bomb.

Farhodshoh K. and Ravsan B. are accused of traveling to Albania in 2019 to carry out a contract killing that was intended to finance IS to the tune of $40,000. That killing was called off because doubts arose over the intended victim´s identity.

The indictment alleges that Ravsan B. then gave Sunatullokh K. the semi-automatic pistol intended for that killing to shoot a man in Germany who had made critical comments about Islam – an attack that was foiled by authorities.

It says that the cell then changed its strategy, concentrating on radicalizing and recruiting young Muslims in Germany and raising money for IS.