You are here: Home / Europe / German, Spanish FM: Moscow and Washington need to cooperate in the fight against Islamic State 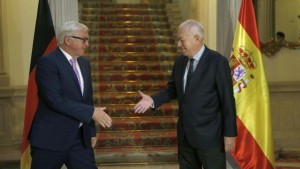 The settlement in Syria is impossible without the help of Russia and the United States, foreign ministers of Germany and Spain Frank-Walter Steinmeier and Jose Garcia-Margallo y Marfil said on Friday.

According to them, Moscow and Washington need to cooperate in the fight “against a common enemy” — the Islamic State (IS) terrorist group operating in Syria.

The Spanish foreign minister pointed to the need of a concerted effort “of all interested parties”, including Russia, the United States, Turkey and Iran. For his part, Steinmeier urged Moscow and Washington to deepen dialogue on the Syrian issue.