The German Federal Criminal Police Office (BKA) has warned that Islamic State may deploy chemical weapons in future terror attacks in Europe, like reported by breitbart.com 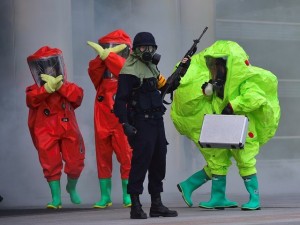 The BKA claim the threat of chemical weapons attacks have been overlooked and Islamic State supporters and other Islamists “are willing and able to procure large quantities of chemicals”. The BKA report says chemical weapons could be used in attacks similar to the 1995 Tokyo sarin gas subway attack or used to poison water supplies, Kronen Zeitung reports.

According to the BKA, other chemical attacks could occur on the food supply or on the transportation of hazardous chemicals themselves. The report, which was presented to the German government, advocates for better safety precautions for those who transport and handle dangerous chemicals as well as safety measures to mitigate the effects of potential attacks.

The fears of the BKA are also backed up by French Prime Minister Manuel Valls who said in November, “We know that there could also be a risk of chemical or biological weapons”.

In December 2015, the European Union parliament released a report claiming Islamic State had employed people capable of creating chemical and biological weapons writing, “In August 2014, a laptop owned by a Tunisian physics and chemistry graduate fighting with ISIL/Da’esh in Syria was found to contain a 19-page document on how to develop bubonic plague from infected animals and turn it into a weapon”.

The possibility of Islamic State smuggling chemicals and other dangerous materials to Europe could also be enhanced by reports they are slowly taking over, and profiting from, the people smuggling trade which has become a new source of revenue after their oil sales were largely cut off by Russian and American air strikes.

Chemical attacks have long been a concern for authorities after the September 11th, 2001 attacks. Shortly after, envelopes containing anthrax were mailed to the offices of several politicians and news outlets. Five people died due to exposure to the substance and the perpetrators were never identified, though assumed to be linked to terror groups.

The most infamous chemical attack occurred in 1995 on a Tokyo subway in which members of the religious cult Aum Shinrikyo released sarin nerve gas on a packed subway train killing 12 and severely injuring 50 others.