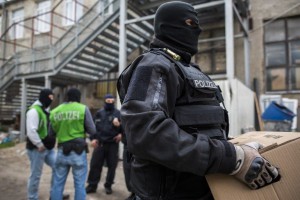 German authorities have raided three homes of people in what they described as the “Islamist scene” who are suspected of having tried to procure forged French passports.

Berlin prosecutors’ spokesman Martin Steltner said Thursday that the raids in the southwestern state of North Rhine-Westphalia stemmed from the February arrest of a middleman in the capital with the passports in his possession.

He emphasized there is no known link to last month’s Paris attacks nor any indication the suspects were involved in extremist activity.

About 80 police officers were involved in the raids, and confiscated documents, hard drives and other items.