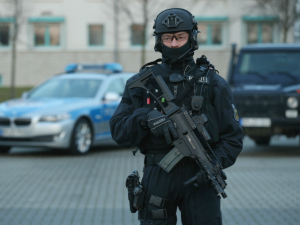 Authorities in the southwestern German state of Baden-Württemberg have closed down a Muslim association and mosque which is believed to have raised funds and recruited for Islamic State terrorists.

According to Baden-Württemberg’s Interior Minister Reinhold Gall, the Muslim association in question — the Islamic Educational and Cultural Center Mesdschid Sahabe — was visited by Salafist preachers and Islamist fundamentalists from the West Balkans, reports Deutsch Welle. He explained:

“We do not tolerate associations that advocate the use of violence to promote religious concerns and collect donations for terrorist groups.

“The association supports, in the form of the so-called ‘Islamic State,’ an Islamist group that carries out religiously-motivated attacks against persons and property.

“Through the association, donations have been collected for terrorist groups and fighters recruited for the Syrian conflict. In addition, the association and its members glorify jihad and religiously motivated terrorism.”

It has been estimated that at least a fifth of the 50 foreign fighters who travelled to Syria from Baden-Württemberg, three of whom died fighting there, frequented the Stuttgart mosque in question which was first raided in an evidence gathering operation back in March.

During the police raid documents, computers, data storage devices, smartphones and other materials were seized, but it is unclear whether any arrests resulted. In any case the property is understood to have been confiscated and the association banned.

The operation took place after German authorities increased efforts to stamp out terrorism financing and support following the November terrorist atrocities in Paris in which 130 people were murdered. Evidence of the crackdown was seen earlier this week when, as Breitbart London reported, one of Germany’s most prominent Salafist preachers, the ‘Sharia Police’ vigilante force founder and Muslim convert Sven Lau, was arrested on suspicion of supporting a terrorist organisation in Syria.

In addition, on Wednesday a new dedicated police unit made up of about 250 officers was unveiled to counter the threat of terrorism. Interior Minister Thomas de Maizière said:

“The danger in Germany from international terrorism is high, as it is across Europe. It was high, it is high, and it will remain high for the foreseeable future.”