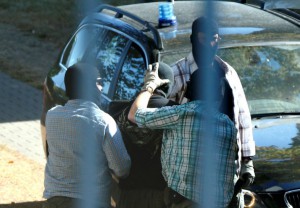 German police said on Wednesday that initial investigations into a 16-year-old Syrian arrested at a refugee hostel near Cologne showed that the suspect had contact with someone who had links to the Islamic State militant group.

It was unclear whether the teenager, who police said appeared to have been radicalised recently, was planning any sort of attack.

On Tuesday, police in Cologne had said an initial assessment had pointed to a “serious threat” but gave no further details.

“An evaluation of the young man’s mobile phone proves contacts to a person living abroad who has IS links and who wanted to win over the young Syrian for Islamist activities,” said the police in a statement on Wednesday.

Germany is on high alert after militant attacks in France and Belgium this year that have killed dozens of people and Germans are especially fearful about security risks after last year’s influx of about 1 million migrants.

Police arrested three Syrian members of Islamic State this month, brought into Germany by the same network that smuggled militants into France to carry out deadly attacks last November.