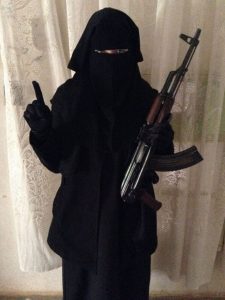 A German woman who joined the Islamic State group fell on such hard times that she had to sell her wedding present, an AK47 rifle, according to prosecutors in Germany, like reported by dailymail.co.uk.

In a statement Thursday, German federal prosecutors said they have indicted Zeynep G. on three counts of participating in the activities of a “foreign terrorist organization,” breaching arms control laws and committing a war crime.

G., a German citizen whose last name wasn’t released due to privacy reasons, is alleged to have traveled to Syria in September or October of 2014 to join the extremist group. After marrying a Chechen fighter she ran his household and used social media to urge a friend in Germany to join IS.

Following the first husband’s death she married a fellow German IS member in October or November of 2015 and moved to the group’s stronghold of Raqqa.

German prosecutors say the couple occupied the home of someone who had fled from IS, which would amount to looting or pillaging under international law and is considered a war crime.

Prosecutors said the woman requested a Kalashnikov rifle as a wedding present and training in how to use it, but after several weeks “it had to be sold due to a shortage of money.”

Her second husband died in 2017 and G. was detained by Kurdish fighters two years later, but managed to flee. She was detained in Turkey in February and arrested on her return to Germany in May, where she now faces trial.