You are here: Home / Europe / German intelligence chief warns about growing number of Salafi Muslims in his country 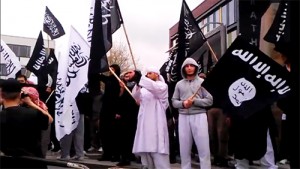 The number of Salafi Muslims in Germany, adherents of  an ultra-conservative school of thought within Sunni Islam, has been growing rapidly and is boosting the ranks of jihadist recruits, the country’s intelligence chief said Wednesday.

Hans-Georg Maassen, president of the Federal Office for the Protection of the Constitution, said that there are 9,200 Salafis in Germany, up from 8,900 in June and  about 5,500 three years ago. His remarks came a day after three young Syrian militants posing as refugees were arrested on suspicion of planning terror attacks.

Salafis, who the German government says want to overturn democracy and install a system based on Islamic law, make up only a small proportion of Germany’s total Muslim population of more than 4 million.  But, security officials say, they join jihadist groups at a much higher rate than others.

“The unchecked growth in the number of Salafis is expanding the pool of recruits for jihadists,” Maassen said.

Almost all of the German nationals who have travelled to Syria to fight for Islamic Statebecame radicalized by Salafis, who target low-income Muslim youths in German cities, experts say.

“Young Muslim men who are drifting are the main targets for Salafis,” said Thomas Muecke, co-founder of the nonprofit group Violence Prevention Network. “Those who preach hate are especially effective in attracting and holding on to these lost young men.”

He also said that agents were facing challenges monitoring potential terrorists who are using various methods of communication such as WhatsApp, Facebook and other networks that sometimes make it harder for authorities to track.

Muecke said authorities believe terrorist groups are trying to attract new recruits from among the refugees who have arrived in Germany in the last year.

It is increasingly difficult for the German intelligence agency to differentiate between those who identify intellectually with Salafism and those who espouse using violence to realize a radical version of Islam.

The warning from Maassen, the country’s top domestic spy came just a day after the German government said three Syrians were arrested in a raid by 200 police officers north of Hamburg.

Interior Minister Thomas de Maiziere said they were Islamic State members who entered Germany along with some 1 million refugees in November, aided by the same network that brought militants into France to carry out deadly attacks last year.

Germany and governments across Europe are on high alert after a string of terrorist attacks in France, Belgium and Germany. Refugees carried out two attacks in Germany in July claimed by Islamic State.

Tuesday’s arrests in a collection of small towns just north of Hamburg, the city where Mohamed Atta lived as a student while quietly plotting the 9/11 attacks, was a shock for Germany. Many are worried that there are more dormant terrorists among the refugee population. Sixty-one percent of Germans believe the influx of refugees has increased the chance of terrorist attacks in the country, according to a poll conducted in July by the Pew Research Center.

Maassen also said the German intelligence agency was increasingly worried about the growing number of “lone wolves” behind the most recent attacks.

“We’re concerned about this new breed of attackers who seem to be acting on their own,” he said. “It’s a real challenge for us to detect such small sleeper cells.”

Salafis have been in the news in Germany in the past when they’ve clashed with police at protests. In 2012, Salafis attacked police protecting a demonstration in front of a Saudi Arabian school in Bonn. Twenty-nine officers were wounded, two of them were stabbed, and more than 100 people were arrested.