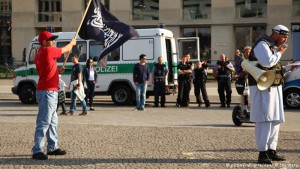 Hans-Georg Maassen, president of the BfV domestic intelligence agency, revealed that “there is a big worry that Islamists in Germany, on the pretext of offering humanitarian help, could try to take advantage of the migrants’ situation to convert and recruit those seeking asylum.”

“Our attention is particularly focused on unaccompanied young refugees who could be easy prey for Islamists.”

Just hours before Maassen’s comments, German police raided eight buildings in Berlin including a mosque, all of which were suspected of being used by jihadists recruiting fighters for the bloodbath in Syria.

According to the intel chief, extremist Salafist Muslims have bumped their numbers in Germany from 7,500 in June to a current total of 7,900.

He added that 740 German Islamists – of which 20% are women – have left for Syria and Iraq, and a third of that total has returned while 120 others died in the fighting.

While Maassen said there is no concrete evidence yet that Islamists are infiltrating Germany among the thousands of migrants pouring in, experts have warned that Western authorities would likely be none the wiser if they chose to exploit that route.

Adding to the concerns are reports on Saturday by the Democratic Union Party (PYD), a Kurdish opposition party in Syria, according to which the Syrian migrant Osama Abdul Mohsen – who was made famous after being tripped by a Hungarian journalist – was in fact a member of the Nusra Front terrorist group.