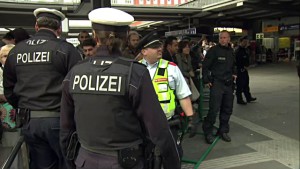 German authorities received a first tip in early September that the Islamic State group planned attacks on rail stations or airports in the country, and last week tracked down the suspect who was arrested Monday, the head of Germany’s domestic intelligence agency said Tuesday.

Jaber Albakr, a 22-year-old Syrian who came to Germany as an asylum-seeker, was overpowered and tied up in Leipzig by three compatriots, who alerted police.

Investigators believe Albakr was considering Berlin’s airports as potential targets. Hans-Georg Maassen, the head of the domestic intelligence agency, told ZDF television it received information at the beginning of September that IS was planning “attacks on infrastructure, stations and airports, in western Europe, particularly Germany.” It was, he said, initially an “abstract” tip, and German authorities “exchanged a lot of information with partners.”

Albakr was arrested nearly two days after officers on Saturday found explosives at an apartment in Chemnitz, about 80 kilometers (50 miles) from Leipzig, but the suspect evaded them.

German daily Bild reported that Albakr had written on an internet network for Syrian refugees that he was at Leipzig’s main rail station and seeking accommodation. One of the Syrians who caught him, identified only as Mohamed A., was quoted as telling Bild that he and a friend had later seen police notices seeking Albakr on Facebook.

Maassen said in separate comments to ARD television that the suspect had bought chemicals online. On Friday, officials observed him at a shop buying hot glue, which he said is “used by people who want to carry out suicide attacks.”