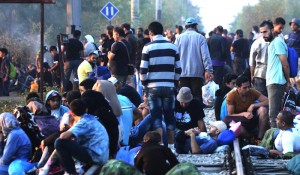 Europe needs better control of its borders, said German Foreign Minister Frank-Walter Steinmeier, referring to cases of forged Syrian passports in the hands of Islamic State jihadists who have crossed to Europe posing as refugees.

The statement follows another by Bavaria’s Interior Minister Joachim Herrmann who said that refugees with fake Syrian passports have disappeared in Germany. Following last month’s terrorist bloody attacks in Paris and threats of the Islamic State, there is increasing concern of similar hits in Germany.

Germany has received over a million refugees from war-torn Syria and Iraq. Steinmeier clarified that refugees from the Middle East and Islamic State militants should not be lumped together. He underlined that the perpetrators of the Paris attacks were European citizens

“However, irrespective of this, it is important that we have more control again over who is entering and leaving Europe,” Steinmeier said in an interview with newspapers of the Funke Medien Group.

Following the Paris terrorist attacks, investigations had shown that two of the perpetrators had travelled to Syria months before the act.

Steinmeier said that expanding the powers of Frontex and beefing up its staff while at the same time offering incentives to Turkey to stem the refugee influx are two essential steps for better frontier control. The vast majority of refugees and migrants crosses to Europe through Greece via Turkey.

The European Commission said it would increase spending on frontier defense while there is a plan to create a 1,500-strong special force to protect Europe’s land and sea borders.