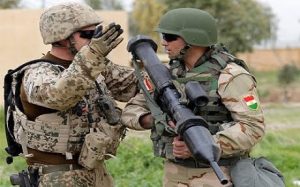 “A withdrawal would be the wrong signal to the parties to the conflict, as if we were resigned to accepting the danger of a new civil war,” Sigmar Gabriel told reporters.

“The more international groups are active there, the lower the chance of a new escalation.”

According to Gabriel, Berlin has been working with partners closely to ensure a peaceful solution to the disputes between Erbil and Baghdad.

“We hope that the very fragile ceasefire holds and that a political solution can be achieved. A new civil war in Iraq would bring unbelievable suffering to this country, which has already suffered too much as a result of political conflicts in recent years,” the German minister said.