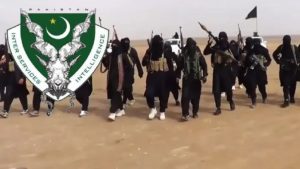 A new German documentary probing the roots of Islamic extremism reveals how the mastermind of the Paris 2015 attacks, Muhammad Ghani Usman, was involved in the operational planning of the Mumbai 26/11 attacks. Usman is a Pakistani national and a Lashkar-e-Toiba terrorist, like reported by opindia.com.

The documentary titled ‘The Business with Terror’ sought to answer questions about who was financing, planning and commissioning terror attacks in Europe. The makers of the documentary follow the trail which led them to the conclusion that almost all Islamic terror attacks that have happened in Europe, the United States, and other western countries had some or other link to Pakistan and its intelligence service Inter-Services Intelligence (ISI).

Shortly after the Paris attacks in 2015, when several groups of Islamic terrorists worked in tandem to carry out multiple terror attacks, the mastermind of the attacks, Muhammad Ghani Usman, was arrested. His interrogation revealed that not only were the Paris attacks modelled on the Mumbai 26/11 attacks but Usman, a Pakistani national, played a pivotal role in planning the gruesome attack that shook India’s finance capital on the dreadful night of November 26, 2008.

“This man was a key member of the Lashkar-e-Taiba. It is believed that he was a part of the operations planning for the attacks in Mumbai in 2008. Yet, nothing was done,” the documentary broadcasted by DW quotes London-based security analyst Sajjan Gohel as saying.

French investigators suspect that Islamic State, which claimed responsibility for the Paris attacks and the suicide bombings in Brussels, sent Usman and Haddadi to Europe to carry out attacks. Usman, the 34-year-old bomb-maker, was arrested in October 2015 along with his Algerian aide and suspected Islamic State fighter Adel Haddadi soon after they arrived on the Greek island of Leros along with 200 other refugees for carrying a forged passport.

According to the investigators, there were two other men in the boat who later blew themselves up outside Stade de France stadium, one of the audacious attacks of its kind on European soil. Haddadi and Usman were arrested by Greek authorities for 25 days because they had fake Syrian passports. Because they were detained, they could not make it to Paris for the attacks. Once they were allowed to go, they followed the main migrant trail and made it to Salzburg in western Austria at the end of November – after the Paris attacks. They applied for asylum at a refugee shelter in Salzburg.

However, the two were arrested again in December 2015 when a fingerprint search connected them to the passports stolen by the Islamic State. An Austrian court later ordered their transfer to France for trial.

Sajid Mir: Terrorist who is known to be a co-ordinator of terror attacks
In 2019, the National Investigation Agency interrogated Usman in connection with the Mumbai terror attacks. The premier agency later said that Usman was in touch with David Coleman Headley, the Pakistan-origin US terrorist who plotted the 2008 Mumbai attack and carried out a recce of potential targets.

The documentary then traces the origins of the number of terror attacks that have rocked Europe in the last few years. The intelligence officials quoted in the film say Sajjad Mir to be one of the nodal contacts that used to coordinate highly sophisticated terror attacks in the Western countries.

“Suspects in the US confirm the existence of Sajid Mir and his role in recruiting and indoctrinating westerners with an aim of sending them back to Europe or the US to carry out attacks in the name of LeT,” the documentary quoted Jean-Louis Bruguiere, a former French investigative judge, anti-terrorism.

Mumbai Police officer Deven Bharti, who was among the first to reach one of the sites attacked by Pakistani terrorists in November 2008 said he got hold of a mobile phone used by the terrorists after they were neutralised. He posed as a waiter of the hotel to know the identity of the handlers instructing the terrorists to continue their rampage in Mumbai. It was Sajid Mir, Bharti recalls, who was issuing instructions to the terrorists to inflict maximum damage and occupy a vantage position to prolong the attacks.

David Coleman Headley: Man who plotted Mumbai 26/11 was working at the behest of Lashkar-e-Toiba and Pakistan’s ISI
The focus of the documentary then shifts to David Coleman Headley, the American terrorist who is serving 35 years in jail for his role in the Mumbai terror attacks. Early in his career, Headley worked as a DEA agent but was caught for smuggling heroin from Pakistan. He was let off the hook after he vowed to become an informant for the DEA and help them stop the smuggling of contraband in the United States.

However, David Headley is caught again for his growing closeness with Lashkar-e-Toiba. Around the same time, the 9/11 attacks occur and the US agencies shift their focus to stopping terror attacks from Al Qaeda and other western-focused terror organisations. The CIA strikes a deal with Headley for not pursuing a case against him. They send him as a US agent to Pakistan, where he is asked to foster ties with Lashkar-e-Toiba and help the United States in its fight against terrorism.

Headley establishes contact with Lashkar-e-Toiba and grows thick with its leadership. Meanwhile, he is also contacted by Pakistan’s Inter-Services Intelligence(ISI) and its chief Major Iqbal, who uses Headley’s American identity to hatch a terror attack against India. Headley is sent to Mumbai under the guise of a consultant and asked to do a recce of potential targets for attacks. At this point in time, Headley is working as a double agent, for the CIA as well as for Pakistan’s ISI.

David Headley, a double agent who worked for the CIA as well as for Pakistan’s ISI
Headley provides invaluable information about locations in Mumbai which are later used by Pakistani terrorists to carry out the ghastly attacks on November 26, 2008. Even as Headley was in Mumbai reconnoitring the possible targets of attack, he was continuously monitored by the British secret services MI6. However, they failed to intimate the Indian agencies of a possible terror plot hatched by him and his Pakistani handlers.

In the aftermath of the attacks, David Coleman Headley shifted back to the United States. The documentary shows Coleman later homes in on Denmark’s capital Copenhagen to emulate the attacks that took place in Mumbai. He carries out a recce of locations in Copenhagen, such a synagogue, a Danish newspaper that published the cartoons on Prophet Muhammad and other places for attack.

A CIA officer interviewed by the makers of the documentary says Coleman was planning to be one of the attackers who would storm the selected places in Copenhagen and open indiscriminate fire on the bystanders, just as the Pakistani terrorists did at several places in Mumbai. However, the MI6, which is closely monitoring Headley’s activity, gets wind of his plan. This time around, they inform their US counterpart and help avert an imminent attack on Denmark’s capital.

Headley is arrested from Chicago. The documentary says that despite repeated backstabbing by Headley, the US agencies strike a deal with him, possibly to hide their association with the terrorist responsible for plotting the Mumbai 26/11 attacks. According to the deal, Headley would escape extradition to India and a possible death penalty and serve 35 years in prison in a US jail. In return, Headley is supposed to purse his lips. It is worth noting that American intelligence has still not shared the financial transactions of Headley with India.