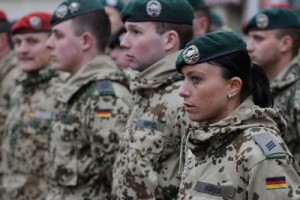 Advances by Islamist militants in Libya pose a new threat to Europe and could unleash a new wave of refugees, Germany’s defence minister said on Monday, adding she did not rule out deploying German troops in the north African country.

“Germany will not be able to evade responsibility for contributing its share,” Ursula von der Leyen told Bild newspaper when asked about whether she plans to deploy troops in Libya, which has been racked by conflict since the 2011 fall of Muammar Gaddafi.

She didn’t give further details on the nature of involvement but said that implementing law and order was the most important goal in Libya, which has seen advances by the extremist group Islamic State.

Germany, which took in 1.1 million refugees last year, is keen to promote stability in Europe’s neighbours in order to reduce the number of people streaming across the Mediterranean.

Deploying troops in foreign conflicts is still controversial in Germany, which since the end of World War Two has tried to steer clear of direct foreign military involvement. But over the last two decades it has departed from its strictly pacifist course.

Since its first foreign combat mission as part of NATO’s joint intervention in Kosovo in 1999, the army has been involved in fighting the Taliban in Afghanistan and last November joined the military campaign against Islamic State in Syria.