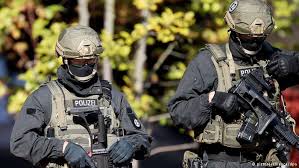 German prosecutors say they have charged a 25-year-old German man with membership in a terrorist organization over allegations he joined the Islamic State group in Syria.

The federal prosecutor’s office said Wednesday that the suspect, identified only as Nils D. in line with German privacy regulations, traveled to Syria around October 2013 to join the group.

They say he received firearms and explosives training and, from April to November 2014, was tasked with tracking down deserters.

He returned to Germany in November 2014 and was arrested Jan. 10 in the Duesseldorf area. He has been in custody since.