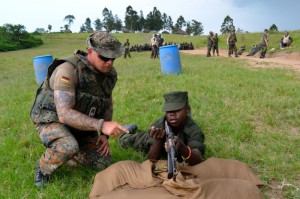 The German cabinet has approved plans to send up to 650 soldiers to Mali, boosting its presence in the U.N. peacekeeping mission in the West African country which is beset by Islamist militant violence.

It also agreed to increase the numbers of soldiers training Kurdish Peshmerga forces in northern Iraq to up to 150 from 100.

The majority of the German forces who will start going to Mali in the coming weeks will be stationed in the north of the country which has seen an upsurge of violence by Islamist militants.

Working with Dutch forces who operate a military camp in the northern city of Gao, they will carry out reconnaissance work and provide logistical support.

Germany’s lower house of parliament is due to decide on both missions at the end of January.

Apart from participating in the U.N. mission in Mali, Germany sent troops there in 2013 as part of a European Union mission to train local security forces after France quelled an Islamist uprising in the north.

German forces are currently carrying out missions in around 13 countries, including Afghanistan and Kosovo, as well as conducting monitoring in the Mediterranean.