The German army is considering sending personnel to Tunisia to train Libyan soldiers within the next few months, according to a report. The mission would aim to help stem the spread of the jihadist group “IS” in Libya. 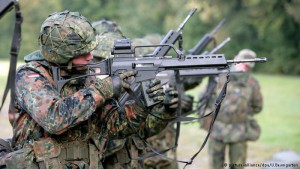 Around 150 to 200 Bundeswehr soldiers could soon be deployed to Tunisia together with Italian military personnel to train members of the armed forces from neighboring Libya, German news magazine “Spiegel” said on Saturday.

Citing internal Bundeswehr plans, “Spiegel” said the mission would be modelled after the current Bundeswehr training mission for Kurdish fighters in northern Iraq.

It said the aim was to enable Libyan soldiers to better combat the extremist “Islamic State” (“IS”) group, which is exploiting the lawless situation in the North African country to seize territory. The mission would take place in Tunisia owing to the lack of sufficient security in Libya itself, according to the report.

However, “Spiegel” said that such a mission would only take place after the rival political forces in the country had formed a unity government. The UN special envoy to Libya, Martin Kobler of Germany, recently succeeded in mediating an agreement that foresees the formation of such a government.

Kobler has also supported the idea of a Bundeswehr training mission for Libyan soldiers.

‘A time for diplomatic negotiations’

The German Defense Ministry has not denied the report. However, a spokesman said that it was not the time for speculation about a military deployment, but rather for diplomatic negotiations.

Libya has been in a state of political chaos and violence ever since the ouster of long-term dictator Muammar Gadhafi in 2011. Two rival governments and parliaments are currently embroiled in a power struggle, while Islamist groups such as “IS” are turning the lack of law and order to their advantage.

Western nations have stepped up efforts to combat the jihadist group particularly since the deadly November 13 attacks in Paris, which were carried out by “IS”-affiliated militants. “IS” has already taken over large swathes of territory in northern Iraq and Syria in its declared bid to form an Islamic “caliphate.”