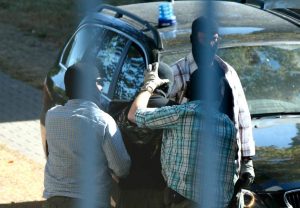 German police arrested a 31-year-old, whose name has been revealed only as Magomed-Ali C. in compliance with German privacy rules, for allegedly plotting a bomb attack in Germany, according to news outlet Deutsche Welle. The suspect is a Russian citizen whom German authorities had been surveilling, like reported by .

Law enforcement said he is a radical Islamist with ties to French terror suspect, Clement Baur, who was detained by French authorities last year for possession of fire arms and about 6.5 pounds of triacetone triperoxide, explosives known as TATP, according to the paper.

The two are believed to have been plotting an attack together when German police discovered explosives the men stored at a Berlin residence in October 2016. German authorities did not disclose why an arrest had not been made at the time.

The duo then split in order to remain undetected. Magomed-Ali C. stayed in Germany and Baur fled to France, Reuters reported.

During a raid of his Berlin apartment on Wednesday, German police attempted to determine the current location of the alleged explosives. None were found, according to The Local.

The German state prosecutor said the planned attack at an unknown location in Germany, was devised with the aim of “killing as many people as possible,” according to Deutsche Welle.

The two were members of the Fusillet mosque in Berlin which was frequented by the Tunisian terrorist Anis Amri, Esme Nicholson reported for NPR.

Amri executed a terrorist attack on a Berlin Christmas market in 2016, killing 12 people.

Magomed-Ali is set to appear in federal court on Thursday.