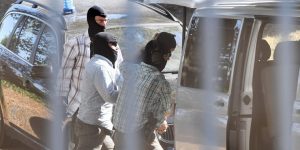 German authorities say they have arrested an 18-year-old Iraqi man member of the international extremist organization, the Islamic State group.

Federal prosecutors say Aqram A., whose full name was withheld on privacy grounds, was preliminary detained Wednesday in the southwestern Rhine-Neckar district.

Prosecutors said Thursday the man is suspected of joining the Islamic State group in 2014 in Mosul where he completed military training for approximately four weeks. During the ensuing period, he worked as a guard and prepared fighting positions for the Islamic State group. In the summer of 2015, the suspect took part in fighting near the Iraqi town Beiji.

He allegedly left Iraq in late 2015 and entered Germany in February 2016.