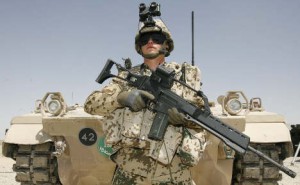 According to Munich daily the Süddeutsche Zeitung (SZ) from the beginning of 2016 German soldiers could strengthen the UN mission in the north African country, supporting Dutch troops in the dangerous northern region of the country.

The Bundeswehr is considering sending reconnaissance teams into the hostile area along with drones.

Germany is currently engaged in an EU training mission in the south of Mali with around 200 troops.

In the larger UN mission it currently only has seven officers and two junior officers involved.

The army laid out plans to extend its presence in the desert country two months ago. But the return of a fact-finding mission last week confirmed the recommendation that the Bundeswehr prepare “for a self-reliant and robust mission.“

That means that the army is likely to send front-line infantry troops, the SZ reports.

Soldiers will be stationed in regions with “considerable or high levels of threat“ the fact-finding mission stated.

The Defence Ministry confirmed that it is working with the Foreign Ministry on “a possible extended support“ of the UN mission in Mali.